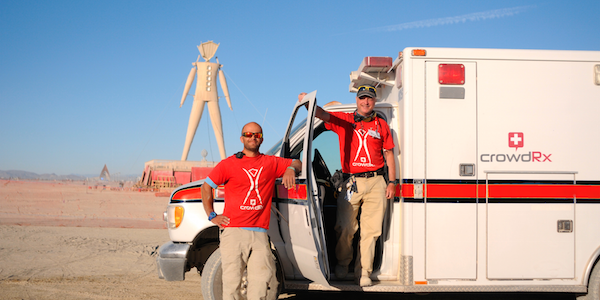 By Joe Reinhartz
Pollstar featured the medical team CrowdRx approximately a year ago. Recently, we were offered the opportunity to visit the team onsite at Burning Man. Why not?

At Burning Man, CrowdRx had dedicated pilots to transport patients to Reno if needed, but it also had a healthcare system complete with emergency physicians, nurses, paramedics, X-Ray facilities, ultrasound, a medical laboratory, a pharmacy, and its own fleet of ambulances roaming the playa. The medical treatment and associated costs were paid for by Burning Man and included with the cost of the ticket. CrowdRx also touted that it was able to obtain for the first time in the event’s history a Nevada license for the facility and medical laboratory, “passing criteria to be officially recognized as an Independent Center for Emergency Care.”

The emergency care center was dubbed “Rampart” in honor of the TV show “Emergency!” but we didn’t see anybody yelling into Motorola radios. It was a pretty chill place, with visitors who were appreciative, talkative and whose needs were as routine as a stitch on a pinky finger to as severe as putting a femur in traction after a skydiving accident.