Behind the Music: A Look at Medical Care at Asia’s Largest Music Festival

You are here:
NewsUncategorized 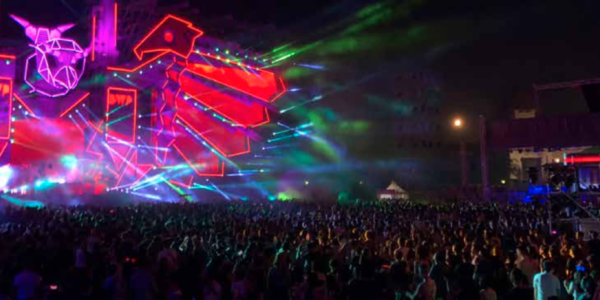 Every December since 2011, Jakarta, Indonesia hosts the largest music festival in Asia and, consequently, one of the largest mass gatherings. Once an underground warehouse rave, the Djakarta Warehouse Project was born out of tragedy. In 2010, a brawl at the original host venue left one dead and two injured two weeks before the event was scheduled. The bar was closed and the founders of the Ismaya Group were forced to find an alternate venue, spurring the birth of the first Djakarta Warehouse Project, better known as the DWP.

Today, the DWP has the largest cumulative attendance of any electronic dance music (EDM) festival in Asia. DWP is a well-organized event with a reported attendance of 90,000 people in 2016, 30 percent of whom were foreign nationals. It is held in an outdoor venue with a hard fence boundary with controlled ingress and egress points which helps with security measures such as limiting weapons, recreational drugs and alcohol.

The most recent DWP took place in December 2017 over two consecutive days in Jakarta, which is located in the Southeast Asian tropics. Indonesia is the fourth most populous country in the world as well as the most populous Muslim-majority country. Typical ambient temperature is approximately 80 degrees Fahrenheit overnight in Jakarta. Performers ran the gamut across different EDM niches and included well-known names such as Steve Aoki, Hardwell, Flume, Tiesto and Marshmello. It appeared to be a typical music festival that would take place on any other continent, which was surprising considering the purported strict Muslim culture in Jakarta that prohibits alcohol and drug use. For example, under Article 59 of Indonesian Law No. 5 of 1997 on psychotropic drugs, the use, production, possession or trafficking of psychotropic drugs “as an organized crime” is punishable by death. However, the number of death sentences handed down has decreased in recent years. 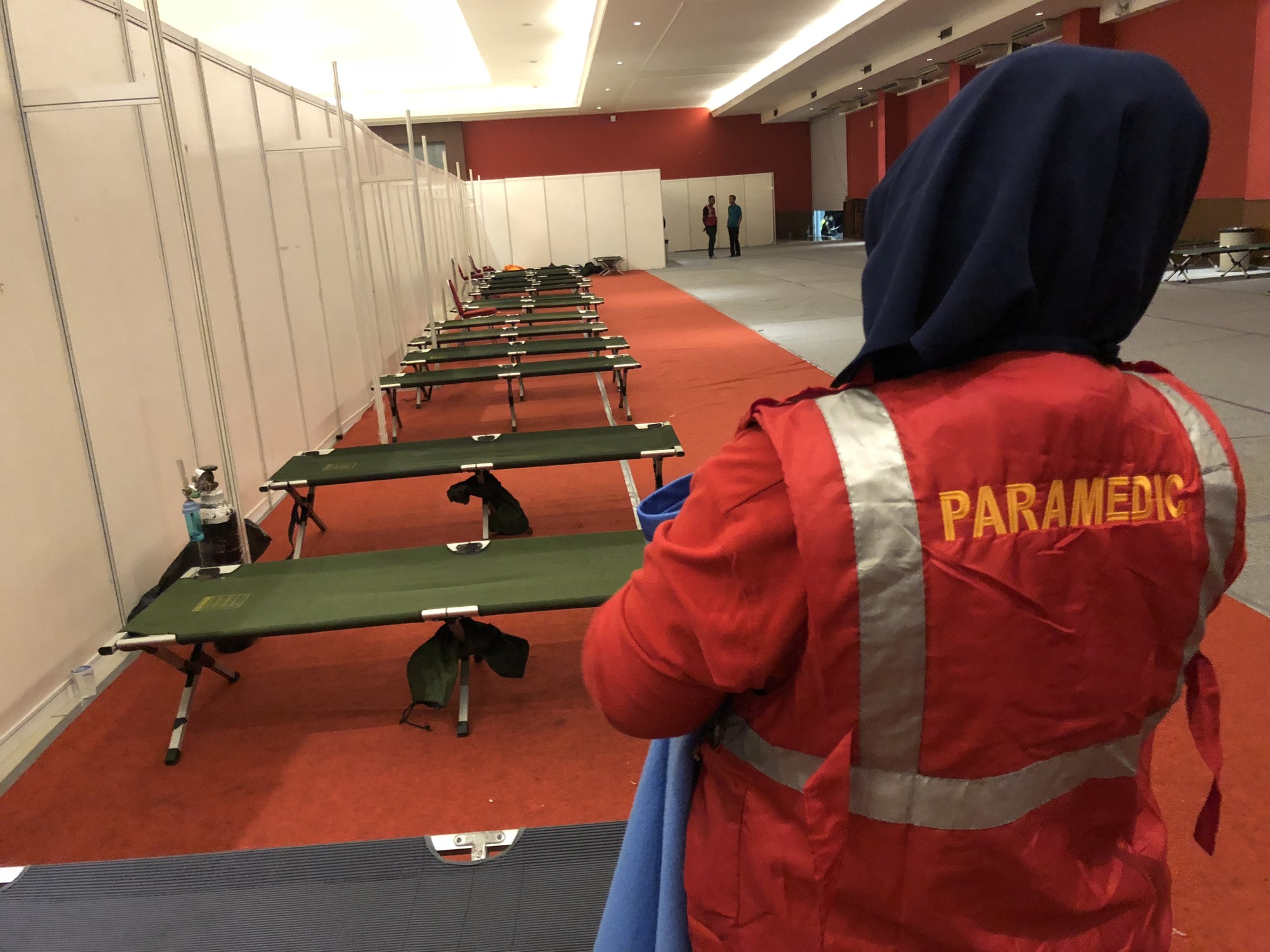 Right: As the night begins, a Paramedic wearing a hijab stands watch over “Main Medical” which is a fixed structure with adequate lighting, staffing and cots.

According to a Jakarta police spokesperson, 1,000 police officers were deployed to guard the event, which en- counters protesters from right wing religious groups who have deemed it immoral. Additionally, city administration officials dispatched a surveillance team to report on the consumption of drugs and alcohol.

The observed crowd was almost universally engaging in alcohol consumption, at times in excess. Additionally, there seemed to be a large percentage of attendees engaging in illicit recreational drug use. Several attendees confirmed that greater than 50% of their friends who attend these festivals use recreational synthetic “club” drugs. MDMA (Methylenedioxymethamphetamine) and ketamine are the drugs of choice in Indonesia and are relatively easy to purchase on the street. MDMA – “Molly” in crystal or powder form and “Ecstasy” in pill form – is an entactogen, a psychoactive drug that differs from psychedelics or hallucinogens such as LSD and amphetamine or stimulants such as methamphetamine. Entactogens produce euphoria, increased empathy and enhanced sensation and perception, but can also cause agitation, tachycardia, hypertension, seizures, hyper- thermia, and cardiac arrhythmias. While chemically related to both psychedelics and stimulants, MDMA typically differs from psychedelic drugs and stimulants because of its psychological effects like emotional com- munion with others and empathy. Ketamine’s effects include hypnosis, analgesia, hypertension, tachycardia, agitation, hallucinations, anxiety, and psychosis. While the use of recreational ketamine is seen globally, it appears to be more common in East and Southeast Asia because of its relatively low price. 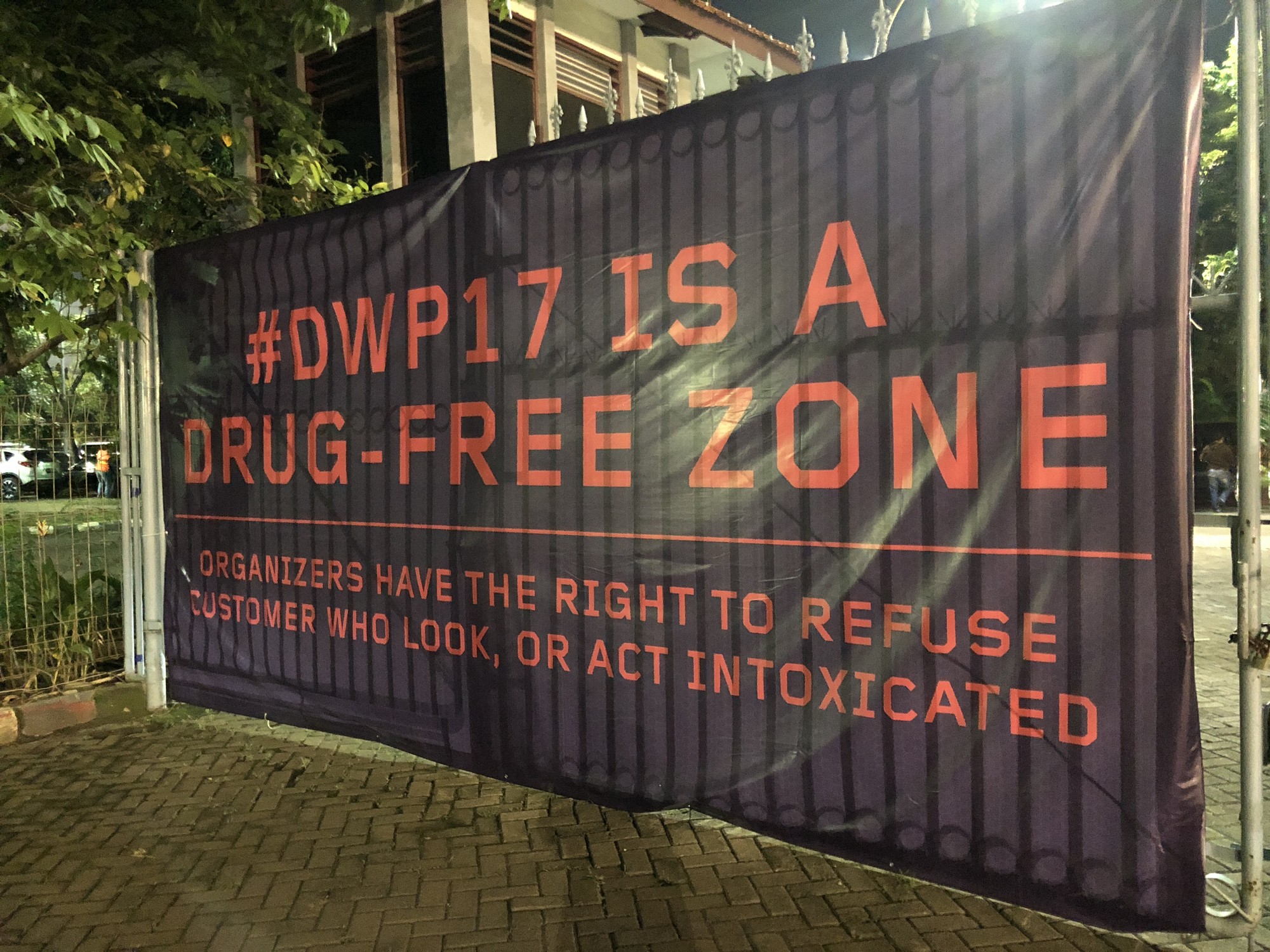 Left: Numerous “Anti-Drug” signs appear throughout the festival, which do not appear especially ominous given Indonesia’s strict death penalty for drug traffickers and life imprisonment for possession.

Generally – and not surprisingly – mass gatherings have a higher incidence of illness and injury than is expected from the general population, likely related to ambient temperature, event type, event duration, crowd mood, crowd density, attendance, average age, and the prevalence of alcohol and drug use. With the increase in music festival related deaths over this past decade, high level and intensive on-site medical care that offers aggressive cooling, paralysis, chemical sedation and on-site monitoring becomes imperative.6

Medical care at DWP was provided by a local Indonesian for-profit event medical company. Approximately 275 patients were evaluated each night at DWP. Fifteen general practitioner physicians and 50 paramedics were staged at five medical tents that varied in size. Of note, a paramedic in Indonesia has the same prehospital skills as an EMT-Basic, although they also function as nurses in the hospitals. Main medical was a large fixed structure with approximately 40 cots ready for use with optimal lighting, climate control, and egress. Medical care largely consisted of BLS care such as wound care, splinting, and administration of over-the-counter medications and oxygen. Physicians on-site treated the more severe alcohol and drug intoxications with B12 and a normal saline intravenous infusion. There was no on- site point of care analysis or advanced diagnostics. If further chemical sedation was required or more advanced therapeutic interventions were necessary, an anesthesiologist would respond from the hospital to the event. Fortunately that has not been necessary in the last several years.

Large signage, set up by event promoters, noting “Medical” at the five tents were well lit and easily identifiable from multiple positions in the venue and the public perception of care was generally positive. Despite the large attendance of young adults who were purportedly engaging heavily in alcohol use and recreational illicit drug use, there were few critical patients. Two critical patients exhibited signs of ‘Excited Delirium’. Such patients are at risk for life-threatening psychostimulant drug-induced toxicity, which occurs secondary to psychostimulant use while performing intense physical activity, such as dancing. Symptoms include hy- perthermia with core body temperature ≥ 40.5°C (105°F) and changes in mental status such as agitation, delusions, hallucinations, seizures, or coma. While these two patients were certainly at risk for this, they were not hyperthermic. For comparison, in a prospective analysis of patients presenting to a large EDM festival in New York, four out of 84 enrolled patients (5%) were hyperthermic. While in the United States, Excited Delirium patients are typically rapidly chemically sedated to prevent further hyperthermia, rhabdomyolysis, ARDS and other end-organ damage, the medical staff at DWP allowed the patients’ friends to attempt to calm or physically restrain them for an extended period of time. One of the two critical patients was trans- ported to the hospital while the other was observed on site.

In the event transport to a hospital is necessary, DWP relies on the “118 Emergency Ambulance Service” also known as the “Ambulans Gawat Darurat” (AGD) – the only public ambulance service in Indonesia. It is headquartered in Jakarta and is analogous to 911 in the United States, but unlike 911, 118 is not government funded and charges those who can afford to pay. The 118 call center in Jakarta receives about 50 to 75 calls per day, despite a population of more than 10 million. For comparison, in New York City, with a population of 8-12 million depending on the time of day, there are approximately 4,000 911 calls each day. To make matters worse, the AGD is severely underfunded and only owns 43 ambulances with average response times of 37 minutes, compared to ten minutes in the United States and seven minutes in Japan. The poor infrastructure and resources available to respond to medical emergencies make extensive on-site medical care crucial in order for DWP to continue to treat their injured and sick attendees in a timely manner. 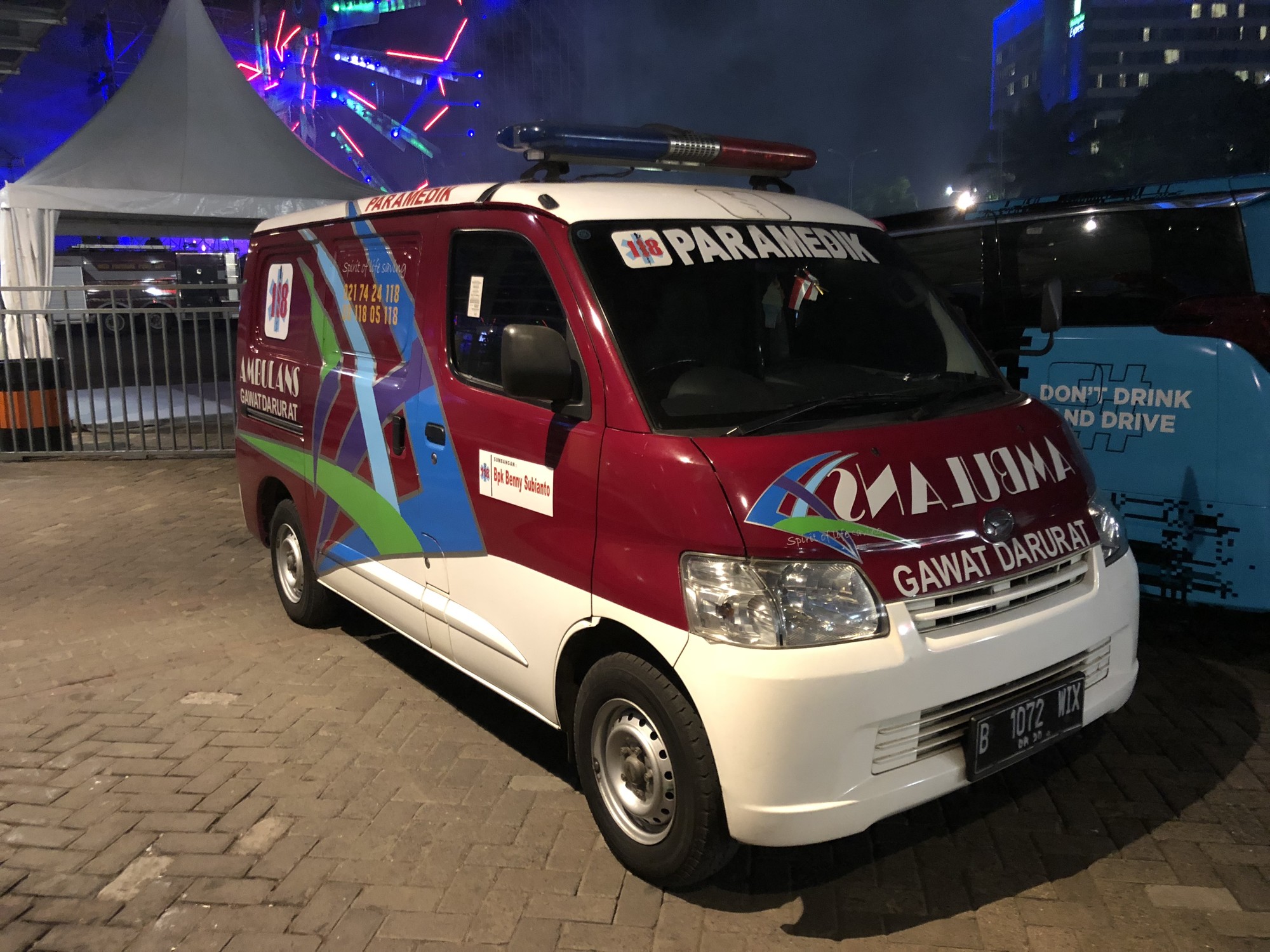 Right: An AGD ambulance stands by on-site as average response times have soared to 37 minutes in Jakarta, compared with 10 minutes in the U.S. and 7 minutes in Japan.

DWP is a well-attended, well-organized music festival that seemed to be similar in size and scope to the various music festivals that occur annually within the United States. There were many young adults having fun, dancing and engaging in both excessive alcohol use and other illicit recre- ational drugs. At DWP, ketamine and MDMA were the drugs of choice. The medical care offered at DWP, despite having adequate light, room and staffing, seemed to offer less intensive and aggressive care than is offered at United States music festivals.

Connor B. Fitzpatrick is the Chief Operating Officer of CrowdRx. He is an Incident Response to Terrorist Bombings Instructor, a Tactical EMT, and a Connecticut POSTC Police Instructor. Full Bio

Matt Friedman MD is the Associate Medical Director of Prehospital Care at Maimonides Medical Center and the Lead House Physician at Yankee Stadium, Madison Square Garden and the US Open. Dr. Friedman is the academic co-director of the Mass Gathering Medicine Summit. Full Bio